Home The Honourable Husband The International Day to Bite Me Subscribe
Hamburger makes Pizza!
You know, it does look a bit wonky.

Should I trash the War Memorial? 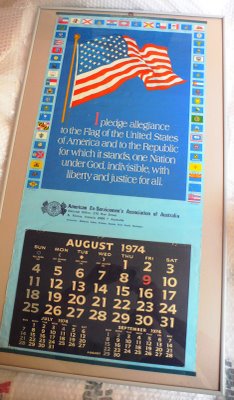 I own a calendar. Like many calendars of its day, this one has a huge ornamental image on top. The image is an American flag, colours rich and deep, with the flags of the fifty states arranged in a clockwise circle around it. These flags follow the order of accession to statehood, starting with Delaware and ending with Hawaii. My home state of Pennsylvania, though a crucial player in American independence, lagged behind the other colonies in signing on the dotted line. Our rather unremarkable flag hides, anonymously, in sixth place. An exquisitely kerned Pledge of Allegiance sits below the central image.

For every day except Sundays, up to and including August 9th,1974, someone has written a single digit number. That day—a Thursday—is marked in red. Thereafter, the hand-written numbers stop.

The calendar was a freebie from the American Ex-Serviceman's Association of Australia, South Australia sub-branch, of which my father was a member. Had he not scored it for free, we would have made do with the Columban Calendar, bought at church every year "to support the missions". Much less flashy, the Columbans showed instructive pictures of their order at work. Perhaps a priest baptising adult Pakistani heathen, a brother teaching the catechism to a bulging classroom of Filipino kids, or a nun washing the eye of an aboriginal child blinded by trichnosis.

The Columban calendar had one advantage. Plenty of space to write doctor's appointments (often missed) due dates for bills (often ignored) and vitally, the number of bottles we asked the milkman to deliver each morning.

Our family drank loads of milk (You can see it today in our waistlines). Raised on cartons of fifties-style Homo Milk in Pittsburgh, one of the pleasures of moving to an Australian suburb was a gentleman who delivered actual glass bottles of fresh, straight milk. Real milk in real milk-bottle-shaped bottles, sealed with a heavy foil cap which we opened by depressing it in the middle with our thumbs. 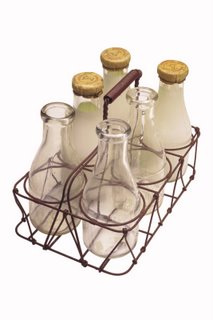 By straight, I mean that the milk was most decidedly not Homo. The Southern Farmer’s Dairy Co-operative bottled the stuff practically from the cow’s teat. Cream sat in a layer on the top—sometimes a very thick layer, especially in winter, when the pastures were rich and the cows a bit lazy. We kids loved this layer of cream for iced coffee and other treats; creamy chocolate milk is the best. Of course, we got yelled at if we opened a new bottle of milk, just to get the cream, while another remained opened in the fridge.

Mostly, my father conducted the morning milk audit. He was the earliest riser, and the grumpiest about how much the world was out to cheat him. He railed against the milkman—otherwise a perfectly nice chap, I thought—because he always tried to up-sell us to home delivered butter, cheese, or some damn thing.

Checking the milk tally, and recording it on the calendar, was one of the few bits of family life that interested my father. Unfortunately, the American Flag Calendar wasn’t quite up to the task.

The functional bit with dates and such huddled at the bottom on a pad of blueprint paper. It was always meant to occupy a wall in a school, church or clubhouse; to be used for planning scout camps or bake sales, or reminding us when Easter was. Not to act as a diary for those like my mother, too scatterbrained to write things down on anything substantial, like one of those newly-trendy Filofaxes. Waste of money to buy anything so vain and self-important as a diary, went the family line.

I can’t recall what started the daily argument on August 9th. I think the milkman left fewer bottles than he’d been asked. An oversight, perhaps? Maybe he’d just run out. No biggie, one would have thought.

My father was outraged. We had better damn well make sure that we check the bill at the end of the week. Or does nobody care about saving money in this house, greedy spendthrifts that we were?

This led to my mother making a few remarks bout the relative levels of industry which the two heads of household displayed. My mother had recently gone back to work, and my father had been laid off from his job. Perhaps it might be he who should check the bill at the end of the week, since he had nothing better to do?

My father always took it to heart. Anger was a hobby.

Now, I’m not sure exactly what they said. How the number of bottles of milk led to affairs of the heart. But at one stage, it became apparent there was an elephant in the room. And it was up to me, eldest son, just turned sixteen, to identify it. After all, they both taught me (at the end of a strap) to tell the truth.

“Well, if that’s the way you feel,” I remarked to my parents, “why don’t you get a divorce?”

I had rubbed the genii out of the lamp, and none of us could recant him. From then on, the arguments weren’t about milk bottles. Not about who was idle and who busy, nor about the hundreds of small snags that family life throws up every day—stuff that most families dispense with in an instant , but which stopped us dead in our tracks and ended in misery and reproach. Now, the issue was divorce. Every argument focused on how much the two spouses hated each other, and how each would be out of the marriage in an instant if the other would just be reasonable about the divorce conditions.

This would continue for another eight years.

One thing that did not continue was anyone marking the number of milk bottles left out for the milkman. Nobody checked the tally; I can’t recall if we even paid the bill very often. Nobody bothered, even, to change the month from August to September.

When the calendar finally came down, I marked the day in red, and kept it. Later, I framed it.

Why? I don’t quite know.

To commemorate a moment of clarity and honesty in the train wreck that was our family life? To congratulate myself for ending a sham? Because it was a nice calendar? No, none of these things.

I kept it to commemorate a tragedy. Kind of like those crosses and flowers people put at the scene of an accident. To honour the suffering. (Mainly, I guess, my own.) I nicknamed this calendar the War Memorial. It has followed me around the world, though in most of the places I lived, there was no spot to hang it. I never even unwrapped it in New York or Munich—the bubble wrap still bears labels from Tokyo. 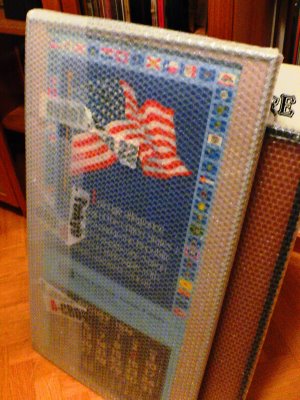 The other day, I came across the War Memorial. Should I find a spot on the wall for it? Part of me says yes, I should put it on the wall to remind me how far I’ve come. Part of me wants to throw it away; nay, burn it in disgust. Part of me says I could probably get a few bucks for it in the Ephemera and Collectibles section of Ebay.

What do you think I should do? There is a poll at the top of the sidebar, or leave a comment.

The poll is now closed, and you certainly made your opinions clear. Everyone told me to treasure this bittersweet keepsake.

Only two votes dissented. One was me voting from my work computer, and the other was me voting from my home computer. This exercise proved both revealing and theraputic, both in the writing of it and the discussion. Why do I feel so differently from the world at large? Do I really think that trashing keepsakes will erase the past? Probably. All you wiser people are telling me that it won't work, right?

I may well take Arizaphale up on her kind offer. Lemme think about it, Riz.

Posted at 12:00 AM in Amerika, Men and Their Minds, Stupid Slice-of-Life Shit that's Supposed to be Charming, The Husband's Most Honourable | Permalink | 0 comments